Rus
﻿
Antropology
1079
0
Tweet
ALIK GULKHANOV: I WAS AN INCONVENIENT CHILD
The Russian actor, the stuntman and the professional bodyguard, the vice-president of the All-Russian Federation for hand-to-hand fight, the main director of the Yaroslavl circus, the media personality and at the same time the person for whom the help to children from orphanages and boarding schools is the most important business. Alik Gulkhanov's destiny is a movement to the purpose, the come true dreams and an example how to achieve without thanking, and to the contrary. 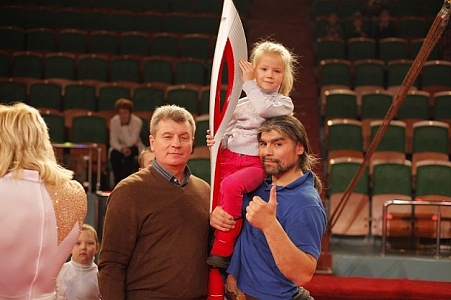 - My life today is sports, public organization "Children of the Suburb of Russia" at federation of hand-to-hand fight of Russia, the Yaroslavl circus which is the only social circus in the country round which people who need special attention unite - veterans, pensioners, children from orphanages, boarding schools, disabled people.

We developed the program - "Circus is the happiness territory". Its basis is a socialization of orphan children and disabled children. It consists of many components, but the main thing is that children have a chance not only to come to representation to circus, but also to communicate to actors – trainers, acrobats, animals. We carry out master classes where they are trained in circus tricks – and it is not only interesting, but also it is useful for their emotional and physical development. 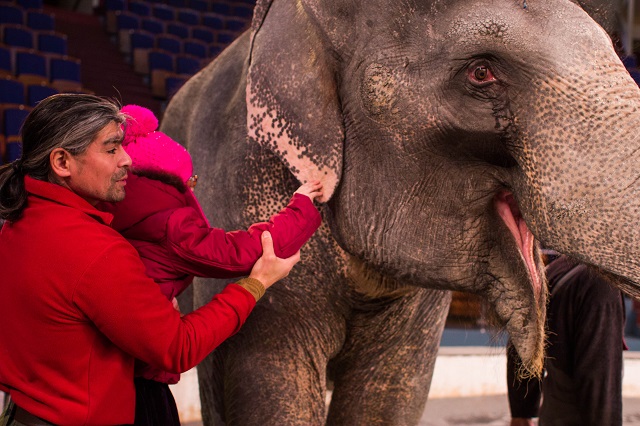 For me circus is not just a work, my long children's dreams came true here. I was brought up in an orphanage of the small Turkmen town. I remember when circus tent arrived there. It was a magic, stars, applause, a holiday for us. We were desperate to get there. We worked with the whole group, and, at last, saved the sufficient sum. All in identical state clothes went to representation with the tutor. We bought tickets, but we were refused to let in as we children from the orphanage. There is a rumor about pupils of orphanages as about hooligans, bandits, genetic murderers. We made the way in that circus through a rear entrance anyway, and were punished for it. But the dream remained.

Life is curious, it gives everyone a chance, and it’s up to you not to miss it. It isn't necessary to be afraid to stumble. When they stick their finger onto you, they jump aside in a bus and emptiness is created because you are from an orphanage in identical state clothes, when life tests for durability, you should not give up.

We created a public organization "Children of Suburbs of Russia" to a federation of hand-to-hand fight of Russia. There are our branches In 79 regions of the country where we held competitions. We go to orphanages of small towns after it, where children are more deprived of attention. We give the master – classes on hand-to-hand fight, sambo, and judo there. I consider, the best gift is to carry away children with any business, sports craft. We come with the team of my friends, athletes who reached something in sports, actors who can become an example the destiny, strength of mind, humanity. The mechanic, the photographer, the journalist, not important, it is necessary to be able to extend desire to move to the purpose from these hundred boys and little girls. To set this purpose before itself.

I come to orphanages and tell children that I need assistants. And it isn't important, whether you will become known or not, the main thing is to be good people. It is easier to fall, not to rise, creep as a worm, and not to think any more of the future. And if you want to become the Man - it is necessary to aspire to it, to set to the right purposes to yourself.

When I was at elementary school the actor Valery Nosik came to our orphanage. We watched him on TV, and a miracle happened he was with us. All wanted to be similar to him. After the movie "Imperceptible Avengers" there was a passionate desire to learn to horseback riding. After "A crown of the Russian Empire" all learned to go on hands. These little things gave us a chance. Since then I dreamed as hero scout from a movie to bypass on hands around on the Eiffel Tower. Years o later when I acted in Paris, I could do it, and with pride I declare - I achieve the goal. 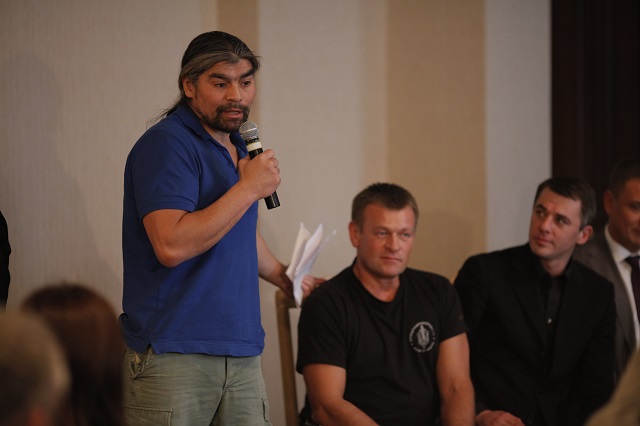 Everything that is put in the childhood is a basis. It is very important when the child has a positive example. Such as Alexander Muromsky, Kostya Dzyu, Nikolay Valuyev, other real masters of the business have to come to orphanages. It is necessary, instead of artificial love for children. To get to the bus, to hand over gifts with "demonstration performance", tale a picture with children. Smile on duty, left and forgot. It is public relations.

I and my friends and adherents don't take banners; we go on a visit to the younger friends. They need to be directed, but not to indulge.

I want to leave a message for them that they are just like anyone else. It isn't necessary to hurry to be adopted. The orphanage gives to everyone the chance to make his own history. You didn't get to orphanage - rejoice, you got there be proud. It is your biography from a blank sheet, you are already the adult. I am glad that there are good shifts. Children write to me, call me, they are proud that they give up smoking, start playing sports, who wanted to go to army - became officers.

3. I got to cinema from an office entrance

I remember myself, I was the inconvenient child. It was necessary to try adoption - it didn't work, I changed orphanages. I dreamed to get an education, to enter a military college. I could kindle a fire in mountains from anything, get food there for myself, but wasn't adapted for a life in a family. I was lucky when I was sent to Petersburg orphanage where the sports were strong. The first profession which I mastered was the gas and arc welder. In parallel I played for St. Petersburg in free-style wrestling, sambo, judo competitions. Thanks to sports I felt at home. But I dreamed to be a movie actor, wanted to be the stuntman. After the graduation of Syktyvkar financial and economic faculty of university I went to Moscow. Through federation of hand-to-hand fight I got to a security agency, I started protecting the second and even the top officials, then I went to Saudi Arabia, I protected there sheikhs. I returned, I was recommended for the Kinotavr festival. At first I became simply an hour on a post, and then I reached the level of the head of the security service. I’ve worked for five years. It is possible to tell, I got to cinema of an office entrance. I had the luck to protect the Hollywood stars which I saw on the screen and I dreamed to resemble them - Jean Claude Van Damme, Dolph Lungren, Eric Roberts, and Gerard Depardieu. Such interesting thing was thrown to me by destiny. After entered the State Institute of Culture in absentia, on Vladimir Simonov’s acting course. I chose a genre of an action. I first was an athlete, than I became a stuntman.

They say that I am a media person. But my popularity is not for the sake of ambitions, it is necessary for me to help, the example to stimulate to achievement of the dream.

Children are completely under the state control – health, food, education. With the good, honest head of orphanage children will have a future. Precisely I know such heads. In Bagryaniki's village of the Yaroslavl region children in orphanage are train in professions, they train them for independent life in advance. It would seem, the village, solitude, but the director Moussa Sinayevich Vantsayev has pupils - Olympic champions, creative people, machine operators who blindly will collect a tractor and will sort it out. It is as small country. The main thing is to give understanding to each child that he can become the real good person, establish the family that his child didn't appear in orphanage. Things that can pull down would never happen. 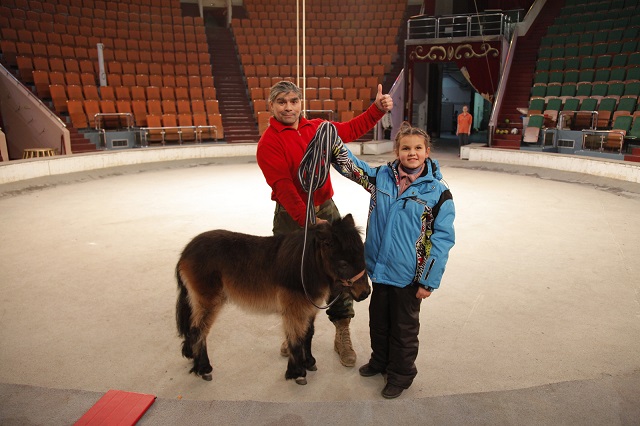 It is impossible to make a toy, means of a profit of children or to create fashion on adoption. I know destinies of children, native by birth which separated in different orphanages, or one is adopted, another is in the state house. It is wrong. These children have to be together. The orphanage can give a lot of things. I consider our country will have enough opportunities to make the worthy monarchic person out of the child. To give him military or civic education, the correct education.

The graduates, wished to serve, can go under the contract to the army, the hazing won't be, and after all they are together since the childhood. To build villages during service for them, apartments somewhere on the remote borders of Russia. It is possible to close that gap on border which the 90th created "dangling", the 2000th. Do you remember the so-called Suvorov villages?

Pupils of orphanages are familiar with discipline and the schedule as nobody else. If you don’t want to go to the army – you may work in a national economy.

The main thing is to direct truly ideologically, as in my orphanage. All were ready to serve in the army there. The patriotism is when the homeland is mother and the father. I am ready now if it is necessary, to rise under a gun.

When I come to orphanages, I tell to children - you are the conveyor, anybody won't pull you if you don't make yourself. You are loved in the orphanage. But you will become adults. It is necessary to train yourself for the future in advance. When they get a message, they send in me photos in Vcontacte - see what I became, they write, they tell. Impressions remain with them, and I know, they won't go to smoke any more, do mucks, I and my colleagues become their idols.

If you grant to yourself the right of a message, to set an example, you can't depart aside any more, it is a not game. In far Ezhensky orphanage near Syktyvkar I got acquainted with the fellow. He writes in social networks - I want to resemble you. I am proud of it. He is only an electrician, but thanks to him five people already gave up smoking, and it gives to me the account as he plays sports, the example how he tightens children. It is important that he becomes a man. he sent photos - the real athlete, the athlete, he prepares for the army, he wants to go to special troops.

It is necessary for me. This is my vital obligation before myself. The best examination and award is the rescued human souls and this is necessary to be proved to this child from an orphanage that he will manage to make a lot of things, not to drink and smoke, and to go forward.