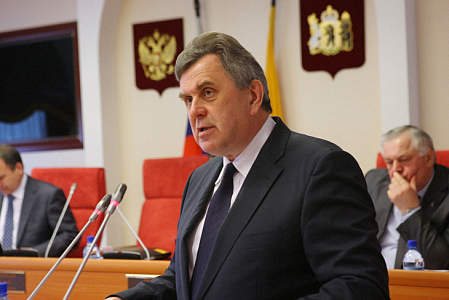 Here are some phrases from speech of the Governor:
- All tasks of the priority development, set by the President of the Russian Federation were carried out In the Yaroslavl region last year, and performance of these tasks provided growth of all main indicators characterizing quality of life of the population. But the most important, to us – both to the Duma, and the Government is that we succeeded to lay the foundation for further improvement of quality of life in the Yaroslavl region in interaction with federal public authorities, with local governments, business community, with all active participants of civil society was
- One of main objectives of Strategy of social and economic development of the Yaroslavl region till 2025 is entrance of the region in all-Russian top-10 on quality of life of the population. For realization of the second purpose of Strategy-2025 on the entrance of the region in top-20 territorial subjects of the Russian Federation on level of economic development – work was continued on development of industrial and technology parks, the support of the traditional directions of the industry of the region was conducted.
– The Yaroslavl region steadily develops, though not without difficulties. But we have important plus – investors come to the industry, power, agrarian and industrial complex.
In translation into Russian it means that in Baghdad everything is quiet – we develop, thus steadily, there are some difficulties in the industry, but they are solvable, state employees in general are provided "on full" in connection with implementation of May decrees of the Russian President of 2012. Generally, everything will be good by 2025. Interestingly, who will be a Governor in 2025? S. Yastrebov? Will he be possible to ask for Strategy realization?
What does it mean? Nothing. Nothing at all. The report of the Governor before regional parliament is a ritual action followed by nothing. Everything is solved in Moscow, if they would want to remove the Governor tomorrow, they will remove. And the report before deputies that we are fine won't play any role. There will be other arguments at once–the debt of area grew, serious faults of development of the industry and of attraction of investments into the region will be found, and in general money on anything except a salary doesn't suffice to state employees. And in it won’t be federal center fault, but the Governor will be guilty. This is Governors’ destiny. And it is not desirable. 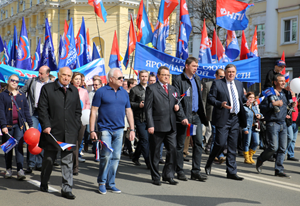 It isn't excluded that this was the reason why S. Yastrebov didn't speak at the opening of the meeting devoted to May 1. It was opened by the chairman of a regional Duma M. Borovitsky. As a whole May Day demonstration was very curious action. According to police reports about 5 thousand people took part in it. Probably, the figure is a little overestimated, but this is not the case. All political beau monde of the Yaroslavl region took part in it. But the former Governor, and nowadays senator A.Lisitsyn outdid all. Look at a photo as he looks – he is purely externally very sports, tightened, simple and stylish; it is possible to tell, in a youth way. It is the real performance against standard attires of officials and functionaries.
An alternative action - "monstration" took place also on May 1 in Yaroslavl. "Monstration" represents alternative of traditional May Day demonstration. It is a mass art action with apolitical, ambiguous and often amusing slogans. Procession takes place in Yaroslavl the second year, and for the first time it took place in Novosibirsk in 2004.

There were no formal reports of police on number of participants of this stock. However, this is not the main thing. The main thing is the structure of the people participating in it. Generally they are youth and not indifferent people with good sense of humour. Look at slogans, and everything becomes clear. There is an offer on development and extension of this stock in the future - it would be quite good to see senator A.Lisitsyn the next year as the forefront monstrant, instead of demonstrators. It would become him definitely. Both from the point of view of performance, and from the point of view of the future. After all it is obvious that the quantity of monstrant will grow from year to year, and demonstrators will fall. Simply because time goes steadily.