Rus
﻿
Yaroslavl
868
0
Tweet
WE WILL STRIKE WITH CULTURE OF THE NAKED BODY ON POLICY
Nothing especially important and extraordinary occurred in the Yaroslavl region for the last week. Well, unless of a number of cultural events which were interested the public.
The rumors about resignation of the Governor S. Yastrebov once again were floating around. And again they weren't confirmed.

The former Governor A.Lisitsyn, and nowadays the senator from the Yaroslavl region declared that in case elections of the mayor of Yaroslavl will take place soon, he is ready to support two people – Alexander Nechayev and Ilya Osipov. He also declared in his interview for Yarnovosti.ru:
- False starts which were initiated today by some companions are spontaneous and unreasoned steps, – Anatoly Lisitsyn added. – I don't see logic and sense in repeating Urlashov’s strategy. He had a long-term strategy which lasted for three years. The criticism of the power, its defects was its cornerstone. And the task was clear - elections of the mayor. Today it is more difficult to speak about it – the system provision on elections isn't solved. But to choose from number of deputies is a big nonsense. The problem consists of a lack of real funds for implementation of powers which municipals have. We have an annual budget sequestering, and in the conditions of a lack of money it is senselessly to enter a city manager: he will have a constant conflict with the mayor. 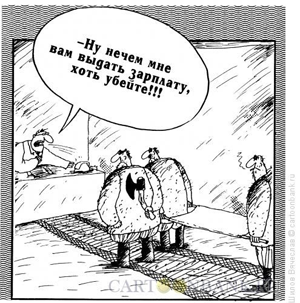 Yaroslavl Statistics’ message on debt on a salary became the most important economic news in Yaroslavl area. By data for May 1, 2014 it made 28 million 330 thousand rubles. Debts of the enterprises to workers grew approximately by 6, 5 million or for 30% in a month. 1, 3 thousand workers did not receive their money in time. 3, 8 million (13, 5%) from total amount of debt is the share of the debt formed last year. That is the basis of debt is made by debt of 2014. Absolute figures aren't so terrible. They aren't too high yet. But it is not the figures that scare, but the growth rates of debt. If this proceeds further, the problem will develop from the private and local into the system one. As they say, God forbid us to remember the 90th years … 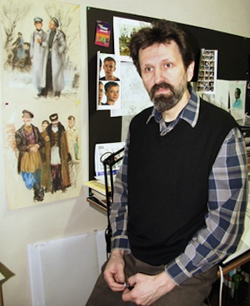 The news from cultural fields is positive and joyful events. On May 16 our fellow countryman animator Alexander Petrov became the winner of the Platonov award of 2014 in the field of literature and art. Such decision in was made in Voronezh by an award council of the award named after an outstanding writer. Five candidates were submitted for council consideration, among which were the film director, the animator, the prose writer, the playwrighter and the musician. A. Petrov was awarded that is called on set of merits (and for "The old man and the sea", and for "My love", and for many other things). It seems a trifle, and it is pleasant. The size of an award which will be handed over to the winner during the Platonov festival at the beginning of June, 2014, makes 500 thousand rubles. Anyway, we congratulate A. Petrov and we are proud that we live with him in one city.
We are proud of one more Yaroslavl artist –Igor Sakurov. He is the chief illustrator of Boris Akunin’s books. He is also our fellow countryman. Last Sunday, May 18, , , the exhibition of graphics and painting of two gifted artists Igor Sakurov and Vladimir Ariskin with age restriction 18+ was opened in recently created showroom "Ariskin-studiya". The NU genre became a reason for such a restriction. The naked nature beautiful in its naturalness, when nakedness keeps a secret of charm and a liberation intrigue was presented in masters of the nudity canvases. Invited guests could not just admire the exhibition works this evening in "Ariskin-studio". They became witnesses of creative process - the artist and nudity. In the face of all two art cloths were created that evening - Vladimir Ariskin and Igor Sakurov worked directly in a hall. Fine live music in the spirit of Blackmore's Night sounded here. Well known politicians, businessmen and public figures of the city that were absolutely not indifferent to NU art were noticed on the presentation. The atmosphere of action was free and liberated. We need more such exhibitions and actions in our city which hasn't been spoiled by the real interesting cultural events that we are not ashamed of (photo of I.Sakurov). 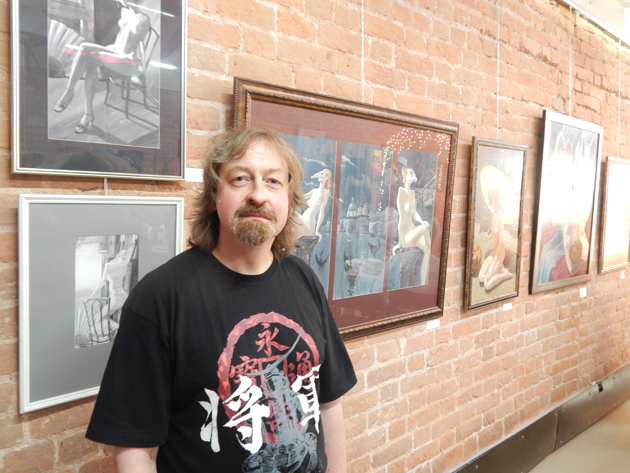 Inscription on picture №1: «Kill me, but I don’t have money to pay you»