Rus
﻿
Politic and economy
1097
0
Tweet
THE STRANGE WAR OR PRINCIPLES OF NON-INTERFERENCE ARE EVERYWHERE
The main events in the world of policy and economy for the whole world take place in Ukraine now. To be exact in East Ukraine. The number of the cities which openly declare need of federalization of Ukraine grows every day and it is extremely difficult to explain it only by an instigation of Russia. 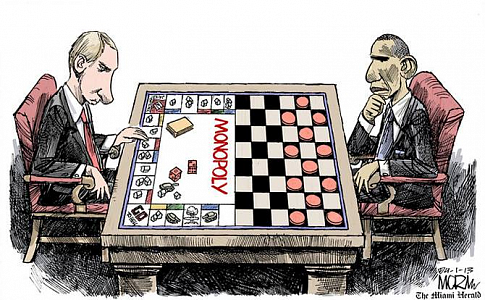 In response to it the central Kiev authorities frighten separatists of punishments and continuation of military operation. But everything occurs in a strange way somehow. The cities of East Ukraine pass from hand to hand, the number of victims (except Odessa) is minimum, insurgents force down helicopters, and law enforcement agencies stay idle at least indulging "separatists" at most. Despite conflict escalation V. Putin suddenly holds a pause and doesn't wish to do anything in general. He even does not want to speak on this subject. He once was ready to enter armies into East Ukraine, and then he gained a mouthful of water. As if everything goes according to the plan. It isn't excluded that it is just like that indeed. It is obviously now that each killed, each new victim gives rise to a bigger internal protest among civilians of East Ukraine. Nobody wants to be at war, however new victims oblige to resistance and make active the increasing segments of the population. It is as a chain reaction, which nobody can stop. Looks like the Kiev authorities understand it and therefore don't ask strongly for trouble: they first approach the downtown, and then they depart. It turns out to be a strange war as a whole. It reminds maneuvers more. It is shown on TV more, than it is actually. The war, of course, exists, but it is more information war as both parties fight for television towers, the television now is the main weapon of defeat. A week ago I saw the same in Western Europe but from a reverse side. 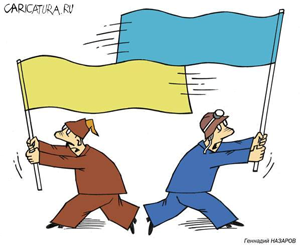 Nobody aware of the reality now, many processes have already left from under control. From under control of all parties of the conflict. And the longer it will occur; the chances are less for at the central Kiev government to fit a situation in any operated framework. Therefore Putin's pause is so explainable: the farther in the wood – the more firewood … All parties of the conflict plunge into the abyss of contradictions and misunderstanding more and more. And every day - more and more. To be a little bit aside in cause to step out of the dark at the right time is very favorable. Without Russia, seemingly, this conflict can not be extinguished in any way. Though the statement of a question of federalization of Ukraine from the President of the country who heads the super centralized state is absolutely strange. Though it does not surprise anybody: the fight has been going out of a legal framework for a long time, and everybody play muscles in the virtual field, but nobody wants to fight seriously.

The sanction against Russia are from the same series . Last week new sanctions were declared – lists of persons from Putin's immediate environment, the account and assets which are frozen in the USA are published. (but nobody publishes the size of these sums and the list of assets. At least in general). In addition one international rating agency (S&P) lowered not only a sovereign credit rating of Russia, but also ratings of the separate large Russian companies (17 Russian corporations will undergo to sanctions), and also the Russian divisions of such banks as UniCredit, BNP Paribas, Sumitomo Mitsui, Commerce and industry Bank of China, Raiffeisenbank, Bank of Tokyo Mitsubishi UFJ. Surprisingly, but the fact is that the Russian stock market responded to new sanctions with some growth of quotations. Experts claim that everybody waited for more severe sanctions of the West, and therefore everything turned out exactly the opposite. Will it remain as it is now? It is unlikely. Though we have rather ridiculous feeling from the western sanctions sometimes, than the sad one. It is already obvious that Europe doesn't want to quarrel largely with Russia at all. It doesn't want to lose sales markets and respectively to lose money (large corporations of Germany wrote about it the open letter to the chancellor Merkel). But the USA demands it. Therefore it is necessary to maneuver all the time, to think something out all the time like that would look very terrible on TV screens and would resemble rather permanent diplomatic job in reality.

The US authorities and EU don't go on sanctions yet against key sectors of the Russian economy. It will be difficult for Europe to refuse the Russian energy resources, namely it would be the most serious blow, analysts consider. Europe is well ready for temporary interruptions in power due to high stocks of gas supply, analysts of Fitch wrote. Europe can replace 7-14% of the Russian gas, increasing own production. The replacement of deliveries with alternative LNG is economically unprofitable, consider in Morgan Stanley: it will demand additional expenses of $7-8 billion a year, but Europe will move towards in dependence on the Russian deliveries. As a whole Europe is interested in diversification of the gas market, and China on which Russia counts so much, won't replace the European consumer. Especially options of supply of gas from such countries as Azerbaijan, Turkmenistan and Iran are already being studied.

Despite of the short-term growth of actions of the Russian enterprises, it is impossible to tell that affairs in economy of Russia are well – it already entered recession actually. The head of the mission of the International Monetary Fund in the Russian Federation Antonio Spilimbergo declared this fact. He also declared that the IMF sharply worsened the forecast of GDP growth of Russia in 2014. At the beginning of April experts of the Fund believed that for this year the economy of Russia will grow by 1,3%, now the expected indicator is lowered to 0,2%. The risk of further decrease in growth rates of economy of Russia is connected not so much with geopolitical intensity, but with many structural problems of the Russian economy. In principle it recognizes both the Central Bank of the Russian Federation, and Ministry of Economics as well.

In general there is a feeling that people close to the Kremlin and influencing real domestic and foreign policy of the state, feel very well the current political and economic environment. The Crimean blitzkrieg against situation deterioration in economy is what the Russian authorities could present to the people. It worked as a whole– the increase of patriotism and the international status of the country in exchange for "temporary difficulties" (which, however, can turn into a long-term). This is what the people are ready to eat. At least for now. According to All-Russian Public Opinion Research Center, the share of respondents, sure that Russia in the next 15-20 years becomes the great power, grew from 41 to 54% in a year; respondents considering that it is already great power make 10 to 20%. These are the maximum indicators since 2003, similar, but less powerful inflow of a great power was observed in the fall of 2008, after the Georgian war. As dominating sign of the great power by inertia respondents consider a developed economy (52%), but importance of powerful army grew from 35 to 42% in a year , and here an importance of welfare of citizens fell from 33 to 25%. Exchange of democracy and human rights (falling from 8 to 3%) for a role of the world center of influence (growth from 6 to 11%) is also curious.

Society as a whole supported such choice: by "Levada Center" data, citizens consider the return by Russia of the status of the great power as Putin's main achievement on a post of the president (51% in 2014 against 36% in 2013). The Public opinion fund reports that since December, 2012 the share of the people calling patriots grew with 64 to 75%. Thus, probably, the isolation threat isn't realized up to the end also. One more poll of All-Russian Public Opinion Research Center shows that citizens don't trust in possibility of isolation of Russia from the West (50% consider it improbable, 13% — impossible). Generally, the majority of the people stays if not delighted, but in certain euphoria. The Russian authorities obviously made a choice for a great power at poor quality of life of citizens.

Citizens supported this choice: the great power statehood is better than wealth. Participation in greatness of the state seems today the more important value than personal welfare to the majority of citizens of Russia. Comparative researches of satisfaction by life showed its growth for Russians in recent years, the Consumer confidence began to decrease in the second half of 2013.

But the Olympic Games appeared here at first, and then and victorious war came just in time. However the contradiction between greatness of the power and welfare of citizens is illusory, and it is always temporary – it is impossible to feed the people with greatness of the country as much as long the growth of welfare is not seen at least in medium-term prospect. It will be necessary to find some replacement.

There is one more confirmation of a new public trend. The next list towards restriction of a freedom of speech is made in the last few days. Now the Internet is exposed to attacks. And if a loss of a post of the general director of a "Vkontakte" social network by Pavel Durov is possible to consider as the conflict of business interests, but an open and public (though accurate) Putin's attack on "Yandex" is an obvious sign of that everything can be under control to the state. And it will come soon. It is a technical question and its decision depends on desire of the unique person. Perhaps it is a fake threat toy so far, but it is so much symptomatic. And the final point. The Kremlin can limit independence of governors more. The government intends to expand a circle of the officials having powers to remove governors and key officials of their administrations. The Government of the Russian Federation made the relevant amendments to the law "About the General Principles of the Organization of Legislative (Representative) and Executive Bodies of the Government of Subjects of the Russian Federation" to the State Duma. Now the head of the region can be discharged of a position by the president or by the majority of legislative assembly of the region. It is planned that federal ministers will have an opportunity to initiate ideas of discharge of governors from a position for "inadequate execution of the duties". Besides, it is supposed that ministers will be able to demand dismissal of heads of profile regional departments and deputy governors. Heads of regions have to react to ministerial representations in 10-day time. The bill can be explained with attempt of the government to increase the bureaucratic weight, to receive part of the powers always belonging to the Kremlin and personally to Vladimir Putin. The highest bureaucracy seeks to weaken influence of governors which will become stronger after return of elections and the reduction of powers of local government prepared in the Kremlin. The new controlling instance tries to counterbalance it. The initiative of the government reflects a negative economic situation in regions. According to Independent institute of social policy, by March the debt of regional budgets made 31% of their own income, at 40% of regions it is higher than 50%, at seven regions the debt exceeded the income. In the conditions of financial crisis regions hardly carry out decrees of the president about increase of salaries to state employees, they don't have enough forces and means for performance of many other powers. In this situation political managers try to create new levers of pressure upon governors and manual control of the province. Generally, it is the full federalization,sirs. Inside and outside.