Rus
﻿
Politic and economy
988
0
Tweet
Events of the week: The President as Father Frost
The main event of this week is, certainly, Khodorkovsky's  release. At first, as though accidentally after the traditional press conference Vladimir Putin dropped a house preparation about Michail Khodorkovsky's possible release. And already next day on December 20 the former oligarch was released from a penal colony and departed by a private plane to Berlin. 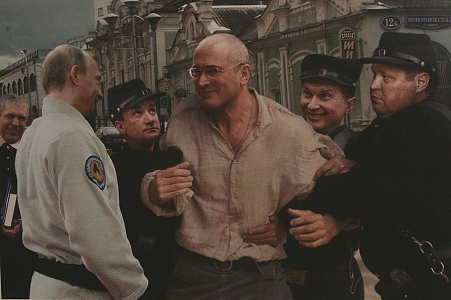 There, in the capital of Germany, on Sunday, December 22 he gave a big press conference (RBC TV channel managed to conduct a live air broadcast). Quite exhausted, but not broken, and I would tell even the brightened-up person appeared before us. The true reasons of the release, most likely, were estimated correctly by Hodorkovsky himself is the upcoming Olympic Games before which Russia and its head should appear somehow more good looking and more decent in the opinion of the world community and obvious unwillingness to really punish Anatoly Serdyukov. As they say, we gave up as a bad job fighting against corruption, so we will look merciful for some time. I am afraid that all this will matter for a short period of time.

Meanwhile in in-Russian political cases changes nothing (and Michail Khodorkovsky's release has, of course, exclusively external value that is called for the use of our western colleagues and partners) – the economic crisis accrues, criminal prosecutions of the right and guilty proceed, the unction flows from the TV and only the approach of the New Year pleases local public somehow quite sincerely. In this sense in the Yaroslavl region everything was as well as in all the country.

Last week, the Kirovsky court of Yaroslavl prolonged the detention for two more months for temporarily relieved from the post the mayor of Rybinsk Yuri Lastochkin. The same thing happened concerning Evgeniy Urlashov, the former mayor of Yaroslavl. On Monday, December 16, the governor Sergey Yastrebov, held a press conference, having prudently appointed it a couple of days earlier to the press conference of the Russian President. He told us that production grows in the region, as well as investments and the budget as a whole in a quite good state. And here you can see what the people (we don't talk any more about real figures both in production, and in investments, etc. which obviously don't confirm the aforesaid) think about it. We asked respondents two questions:

1. "What problems are the most actual, important for you"?

2. "What problems do you consider as the most urgent to be solved by the authorities and local government?"

Answers to the first 10 most significant for the population problems (TOP-10) are provided further in percentage of respondents (the telephone survey of the population of the Yaroslavl region was conducted on December 18-20, 2013, sample of 600 people):

1. What problems are the most actual, important for you?

2. What problems do you consider as the most urgent to be solved by the authorities and local government?

So Happy New Year, companions, we are having Olympic Games again as well as in 1980! Holiday is coming soon! Believe it will work well! Father Frost will try … And problems? What about problems? Problems will be solved …

The collage by Andrey Budayev is used the publication.