Rus
﻿
Politic and economy
1336
0
Tweet
REFERENDA INSTEAD OF BEER AND CARS
Ukraine remains the main point of news for Russia. And the further events are going, the more unclear they became to be analyzed.  There is no formal logic in it. And, it seems, V. Putin reversed his motion as he made clear with his public, peaceful and emphasized position that he is ready for negotiations with the West and urged supporters of federalization to wait a little with holding referenda on self-determination in Donetsk and Lugansk areas. But referenda took place and it seems that the high appearance (more than 70%) and high support of self-determination of these regions (more than 90%) are recorded. 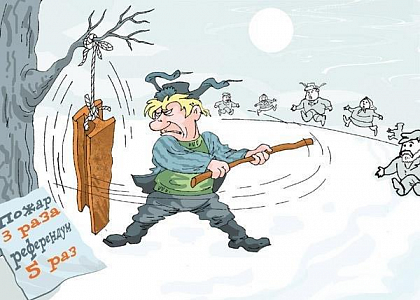 It is clear that all these referenda are out of a zone of a legal framework, however, all that occurs now in Ukraine is out of a zone of a legal framework … Even, if organizers of referenda cheated both in an voters turnout, and with level of support of self-determination (by different estimates level of the cheat can't exceed 10%), we can't ignore these results. The least reason is that the presidential elections are to be organized both in Lugansk, and in Donetsk areas somehow. It will be extremely difficult to do after the referenda. The lowest voter turnout is destined here, and therefore central Kiev authorities can't talk about any level of legitimization of presidential election in these regions. Bloody events both in Odessa, and in Mariupol also don’t promote this process in any way. The population as a whole is simply frightened, buys up products and waits for the worst. It is useless to talk about the presidential election. We will remind that 3, 4 million voters were registered in Donetsk region at the last parliamentary elections in 2012. 1, 8 million were registered in Lugansk. And it is nearly 14% of all voters of Ukraine.

Anyway it is possible to define three main thoughts in the statement of Putin:

1. Russia doesn't intend to pursue policy of further escalation of intensity in the east areas of Ukraine,

2. Russia isn't going to use military forces there

3. Russia is ready to look for recovery from the crisis with attraction of other countries, as western, and, for example, the states of the CIS, and even Ukraine,

These statements calmed intensity temporarily. Everyone waits for continuation of the party. 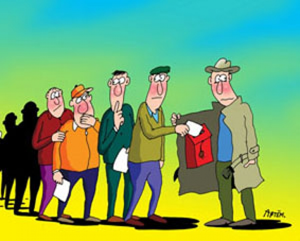 Meanwhile even simple public expression of more conciliatory position of Putin affected the financial markets - the ruble became stronger more than on the 60th kopecks and its cost made 35,03 rub for dollar on May 12. Investors and speculators considered that the fears connected with Ukraine are groundless so far. However, this "rebound" doesn't speak about removal of geopolitical risks. They are postponed. Financial analysts advise to wait for Putin's public assessment of the held referendum for clearing of a situation. This assessment may not happen; therefore the uncertainty in the market may amplify. Especially as there is a feeling that events in the southeast of Ukraine go outside any scenarios. In this case the instability in Ukraine is provided for many months or years. It seems that the situation can finally slip in the most dangerous format — uncontrolled randomization of the country.

Different versions circulate concerning the reasons of the "peaceful" statement of Putin – from a personal request of the German chancellor A. Merkel to the Kremlin trick and real independence of separatists. It isn't excluded that Putin adopted more cunning tactics: not direct public collision of interests, but indirect – he acts as a "dove of peace", yet informally supporting "the national republics". We will notice that uncontrollable by Kiev power separatists in Lugansk and Donetsk areas support creation of their own state. The questions submitted for a referendum, sound almost equally in both regions. Participants of plebiscite asked to answer, whether they support the “Act of the state independence of the Lugansk national republic and the Donetsk national republic". It is important that they do not mention in questions whether the newly appeared republics be a part of Ukraine. It seems that "the national republics" and Moscow leave themselves a space for the bargaining with the West and with Kiev. It is also confirmed indirectly by the fact that the Russian authorities didn’t interfere with holding a so-called referendum of inhabitants of Lugansk and Donetsk areas in Moscow, though there is no legal ground for its carrying out in Moscow, the city where mass protest actions disperse quickly …

Whether the peak of intensity of a situation is passed in Ukraine? It is unlikely. We all need to stock up with patience and tranquility. Objectively the most reasonable option of settlement in Ukraine looks absolutely unrealizable. This is an external management imposed by the West and Moscow together up to the input coordinated in the UN or OSCE's peacekeeping contingent. But for this purpose it is necessary not only to agree among themselves, having risen over vulgar ambitions, but also to reject any sounding nonsense on "democratic self-determination" of people. The results of referenda here are only the instrument of formation of a position of elite, instead of real opinion of the people with which they will reckon in practice. The people are confused and don't know what to do. Remember a referendum on an occasion of preservation of the USSR held on March 17, 1991 (and it was in a zone of a legal framework). What did become with its results? Nothing. Elite ignored it. They acted in their own way. The same will be in Ukraine: unless the main parties of the conflict show mutual interest not to imaginary, but to real settlement of the conflict, there will be both firing, and referenda, and the devil knows what else. They will agree – everything will calm down if not at once, it is rather predictable and responsibly quickly.